The crash events of flight MP 495 have a huge physical impact on the entire plane and its occupants. This physical impact and its possible consequences are largely ignored in the aftermath of the crash.

This page is dedicated to the effects on the front part of the crashed Martinair DC10 Anthony Ruys.
As a direct effect of the crash, the plane had to endure many grave and  rotational forces. These forces are transferred to the interior of the plane and subsequently to the occupants.
In the care of the occupants there was and is hardly any interest in these forces, such as the violent movements on the head, and their possible effects.
Mild Traumatic Brain Injury, such as Coup Contrecoup injury, will easily be overlooked.

Crash description of front part in brief
After sliding off the runway the plane got stuck in the wet soil. The movement of the front part of the plane instantly changes from ‘forwards’ to ‘backwards’. The wreck glides over the soil.
Behind row 19 the plane breaks.
Whilst gliding backwards the front part of the fuselage is overturned to the right, after that the fusleage rotates to the left side where it came to a rest. 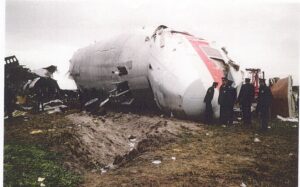 The ‘ditch’ made by the landing gear clearly shows the enormous force with which the crashed plane slid backwards.

From the investigation report, page 73:
In a second section, Forward intermediate, seatrow 11 to 19, there were 73 passengers and two cabin crew.
In this zone was the tranversial rupture that completely broke the aft part of the aircraft from the front part.
The passengers situated in that area left exclusively by the holes in the fuselage, either by themselves or being ejected or assisted out.
This situation existed in 20 – 25 % of the cases .
From the above passengers there were 6 fatalities, two mild burned, 26 serious injuries (mainly with fractures) and 28 minor injuries.
One of the cabin crew suffered minor injuries.
This section was the one sustaining more serious injuries of traumatic origin, probably in direct association with the rupture of the fuselage, the observed mortality essentially being due to cranial or spinal injuries . 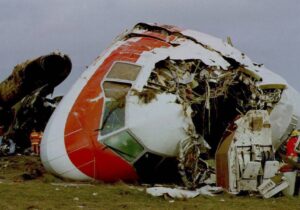 The grass that sticks out of the right side of the cockpit and the scratching on the outside of the fuselage show that during the crash the Anthony Ruys first rolled over and slid on its right sight.

From the Investigation Report
1.12.5 Cabin Interior
1.12.5.1
All the forward cabin up to station 1039 (row 16 [CtH 19?]) which corresponds to the fuselage section which, due to the favourable wind direction, was not touched by fire, shows massive deformation consistent with the sliding on the right hand side and ceiling, in the soft soil of the runway edge, and mud, sand and light vegetation entered this area. 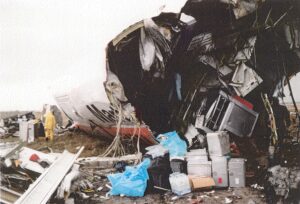 The steep slope angle of the cabin floor after the crash is clearly visible. Also the bareness of the floor shows.

The FAA / CAA report Benefit Analysis for Aircraft 16-g Dynamic Seats (April 2000)  writes on this part of the plane;
This section of the fuselage was transversally ruptured due to the explosion and/or the longitudinal twisting moment of the fuselage, while the aircraft was off the runway.
Statements (in the form of questionnaires) from the surviving passengers indicated that most of the seats did not resist the impact, hence a large number of occupants in this section were ejected during the impact sequence.

The top side of the crashed Anthony Ruys shows the damage due to the rolling of the plane. 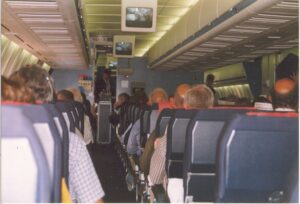 Picture not taken in the crashed plane but later in a comparable MD11.
The crashed plane had similar seats. The lack of proper neck protection is clearly visisble.
Due to this lack of protection many necks and heads will be unnecessary injured as a consequence of the many violent movements of the plane during the crash.